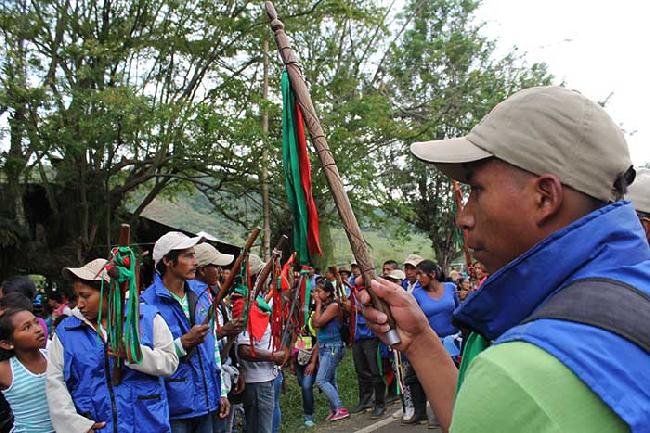 Members of the Indigenous community of Cerro Tijeras in northern Cauca Department, south-western Colombia, have been killed and others possibly forcibly disappeared. Further death threats against Indigenous Peoples in the area have also been reported.(Picture ACIN – Çxhab Wala Kiwe)

The whereabouts of Berney Trochez and Wilson Trochez have been unknown since 14 April when they were last seen in the Agua Bonita area of the jurisdiction of Robles, part of the Cerro Tijeras Nasa Indigenous Reservation (Cerro Tijeras Resguardo) in Suárez Municipality, Cauca Department. There is concern that they may have been forcibly disappeared. On 15 April unidentified gunmen forced their way into a house in the Agua Bonita area and abducted Mario Germán Valencia Vallejo, Belisario Trochez Ordóñez and Cristián David Trochez and forced them into a lorry. The bodies of the three men were found in the Guadalito area of the Cerro Tijeras Resguardo later that same day. The men had been shot in the head. All five men were members of the same family.

The killings of Mario Germán Valencia Vallejo, Belisario Trochez Ordóñez and Cristián David Trochez and the possible forcible disappearances of Berney and Wilson Trochez follow repeated paramilitary death threats in recent years and months against the community of Cerro Tijeras, which has been resisting the arrival of international mining and other economic interests on the lands they claim as theirs. There have been ongoing demonstrations by Nasa Indigenous communities demanding access to lands in the region, including lands which should have been allotted to them as reparation for human rights violations committed against Indigenous communities in the early 1990s. On 15 April, in a death threat sent by SMS text, a paramilitary group calling itself Colombia sin Guerrilla declared a number of people to be military targets, including those participating in the land protests.

Please write immediately in Spanish or your own language:

Expressing concern for the safety of members of the community of Cerro Tijeras, and other Indigenous leaders in northern Cauca Department, and urging the authorities to guarantee their safety in strict accordance with their wishes;

Calling on the authorities to order a full and impartial investigation to establish the whereabouts of Berney Trochez and Wilson Trochez, and to ensure that all measures are taken to guarantee their safety, to make the results of criminal investigations public and if confirmed that they have been subject to forced disappearance to bring those responsible to justice;

Calling on them to order full and impartial investigations into the killings of Mario Germán Valencia Vallejo, Belisario Trochez Ordóñez and Cristián David Trochez and the death threats against Indigenous Peoples in northern Cauca Department, publish the results and bring those responsible to justice;

Urging them to take immediate action to dismantle paramilitary groups and break their links with the security forces, in line with stated government commitments and recommendations made by the UN and other intergovernmental organizations.

And copies to:
NGO
ACIN

Over the past 50 years, Colombia’s internal armed conflict has pitted the security forces and paramilitaries against a range of guerrilla groups. In spite of the ongoing peace process all the warring parties continue to be responsible for serious crimes under international law and other human rights violations. Indigenous communities are among those most affected by the armed conflict. According to the National Indigenous Organization of Colombia (Organización Nacional Indígena de Colombia, ONIC), 10 Indigenous people were killed for conflict-related reasons and at least 2,819 forcibly displaced in the first nine months of 2014. According to the Association of Indigenous Cabildos of Northern Cauca (Asociación de Cabildos Indígenas del Norte de Cauca, ACIN) more than 600 Indigenous people have been killed in Northern Cauca since 1999.

On 16 December 1991, 20 Nasa people of the Huellas Indigenous Reservation, including children, were killed in a joint paramilitary-police operation on the El Nilo farm in Caloto Municipality. The case of the El Nilo massacre was submitted to the Inter-American Commission on Human Rights (IACHR) in December 1992. Following an agreement between the Colombian government and the IACHR a committee was created to investigate the massacre, which recommended in 1996 that the Colombian government must ensure that those responsible would be brought to justice and that the families of the victims would receive reparation.

In August 2014 the Colombian Supreme Court of Justice ordered that the criminal investigation of a general and a major allegedly linked to the massacre, which had been archived by a military court in July 1999, should be reopened. In February 2015 the general and the major handed themselves over to the police authorities. The Huellas Cabildo (Indigenous Council, which is the maximum political authority within their territories) issued a public statement on 5 February demanding justice and comprehensive reparation.

Since 14 December 2014 Indigenous Peoples in northern Cauca have been occupying land to demand full reparation, including access to land, as redress for several mass killings, including the El Nilo massacre. In this context the security forces have been accused of excessive use of force in reacting to Indigenous demonstrations currently taking place in the north of Cauca. On 10 April 2015 on the
La Emperatriz farm that Indigenous demonstrators have occupied in recent weeks, Guillermo Pavi Ramos, an Indigenous leader, was shot when he was close to army and police units of the Mobile Anti-Riot Squadron (Escuadrón Móvil Antidisturbios, ESMAD). The ESMAD allegedly blocked the road when several people tried to take Guillermo Pavi Ramos to hospital, thereby delaying his access to medical attention.

On 14 April 2015 11 members of the army’s Mobile Brigade No. 17 were killed after being attacked by guerrillas from the Revolutionary Armed Forces of Colombia (Fuerzas Armadas Revolucionarias de Colombia, FARC) in the municipality of Buenos Aires, Cauca Department.