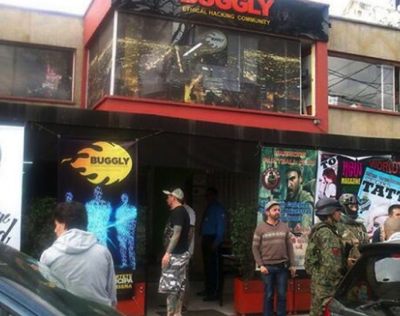 “Despite the exotic combination of luncheonette and computer instruction center, a secret is hidden there: behind the facade is a National Army signals interception center.”

The business described here was registered in Bogotá on September 12, 2012, just a few days after Colombian President Juan Manuel Santos announced the launch of talks with the FARC guerrilla group. From this room, reports an investigation published to the website (but not the paper version) of Colombia’s Semana newsmagazine, soldiers and civilian hackers working for Colombian military intelligence carried out illegal wiretaps and email intercepts.

Their targets included “the same ones as always”–NGOs and leftist politicians. This is outrageous enough. But the Army unit was also tapping into the emails and text messages of the Colombian government team negotiating with the FARC in Havana, Cuba.

“Jaramillo (Sergio Jaramillo [a negotiator and the high commissioner for peace]), Éder (Alejandro Éder [director of the presidential demobilization and reintegration office, and an alternate negotiator]) and De la Calle (Humberto de la Calle [the lead negotiator]) were some of those whom I remember. The idea was to try to obtain the largest amount of information about what they were talking about, and how it was going,…” a source told Semana.com.

One of the most important, and most uncertain, questions about Colombia’s peace process with the FARC is the extent to which the country’s powerful military actually supports it. These new revelations multiply the uncertainty.

President Juan Manuel Santos has gone to great lengths to keep the generals in the tent: defense and security are off the negotiating agenda, a prominent retired general is one of the negotiators, FARC calls for a bilateral cease-fire–which the military resists–have been flatly refused, and the Santos administration has tried (and so far failed) to give military courts greater jurisdiction over human rights cases, in what some analysts regard to be a quid pro quo.

The chief of Colombia’s armed forces, Gen. Leonardo Barrero, insisted in a recent interview that “we feel very well represented in the dialogues.” But there is little doubt that a significant portion of the officer corps, who have all spent their entire career fighting the FARC, would prefer to end the conflict on the battlefield. It is for that reason that support for ex-president Álvaro Uribe, a fierce opponent of the negotiations, remains high among the officers. As María Isabel Rueda, a longtime reporter and columnist for Colombia’s most-circulated newspaper, El Tiempo, recently put it: “Soldiers have hearts too, and some of them still beat more for Uribe than for Santos.”