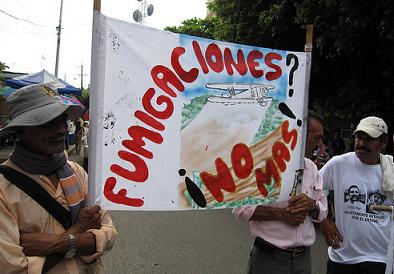 All the versions of this article: [English] [Español]

Washington, DC – The Center for International Environmental Law (CIEL) submitted an amicus brief to support the legal arguments in a case on behalf of a small farmers association that is suing for damages due to aerial herbicide spraying – known as “fumigation.” The amicus calls for an end to Colombia’s drug practices of fumigation per its obligations under both domestic and international law to protect human rights and the environment.

Under the rubric of Plan Colombia and with the support of the United States, Colombia has used fumigations since 2000 to eradicate crops of illicit use, in particular coca plants, which are a component of cocaine.

“The idea that coca leaves are drugs has turned the war on drugs into a war on plants,” says Marcos Orellana, Senior Attorney at CIEL. “Fumigations are not just a failed drug war experiment, but a misdirected war tactic whose toxic legacy will be borne by Colombians and the environment.”

Sprayed glyphosate, marketed in the United States as Roundup, among other chemicals used in fumigations, has widespread health impacts. After fumigations take place, local communities report skin, respiratory and gastrointestinal issues. Effects are most severe in children, pregnant women, and the elderly.

Environmental damages are also rampant. Imprecision in spraying has led to massive crop loss. Residual spray has led to chemical seepage into groundwater and aquifers. The destruction of non-targeted plants has damaged some of the most biologically diverse regions, jeopardizing their very existence.

The amicus supports the arguments of the Lawyers’ Collective José Alvear Restrepo (CAJAR in Spanish) who represents the small farmers association in the case.

Note to editor: The full text of the amicus in Spanish can be found here.

Center for International Environmental Law (CIEL) uses international law and institutions to protect the environment, promote human health, and ensure a just and sustainable society. CIEL is a non-profit organization dedicated to advocacy in the global public interest, including through legal counsel, policy research, analysis, education, training and capacity building.