Court convenes public hearing for #TheRighttoDefendRights: What does it mean? 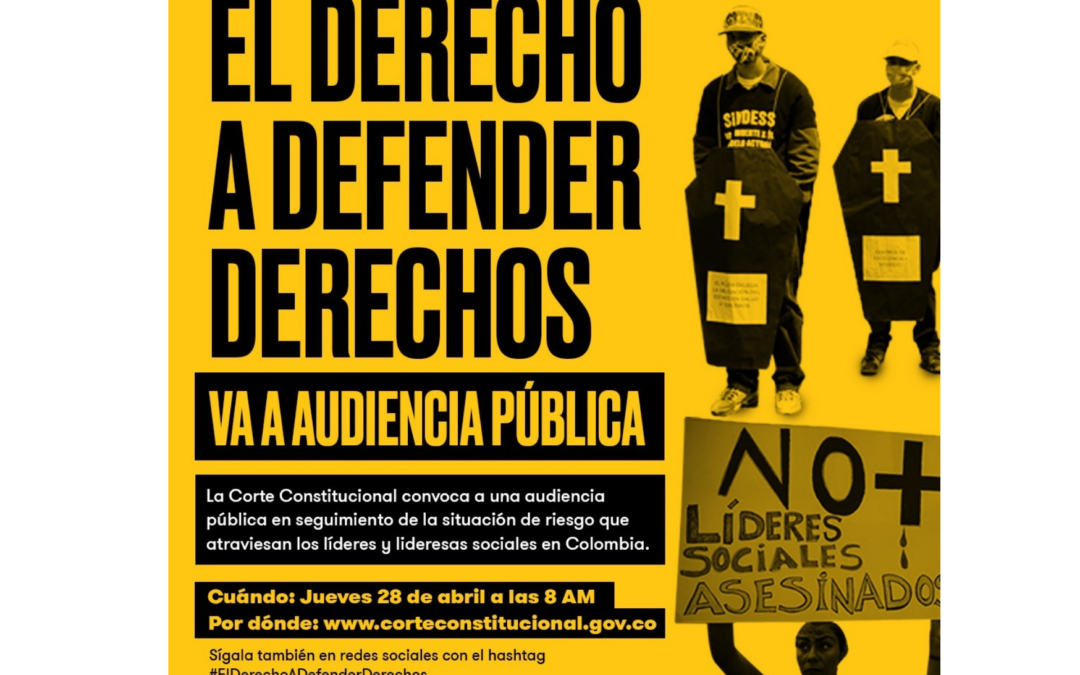 The public hearing will review the current situation of human rights defenders and the respective commitments of the State. Social leaders, civil society organizations and State entities in charge of guaranteeing the right to defend human rights will participate.

This public hearing is part of the tutela action filed by a group of social leaders from Cauca, Chocó, Casanare, Antioquia, Valle del Cauca, Putumayo, Córdoba, Cali and Medellín, supported by human rights platforms and civil society organizations, including Dejusticia.

In this space, in addition to the plaintiffs of the tutela and the organizations that accompany this process, the State authorities in charge of guaranteeing the security of social leaders (such as the National Protection Unit, the Ministry of the Interior and the Ombudsman’s Office) will participate.

Among the objectives of the hearing, which will be virtual, is the collection of information to assess the current situation of state policy on guarantees for human rights defenders in Colombia. The Constitutional Court will also seek access to testimonies that will allow it to understand the effectiveness of the State’s protection routes for leaders in Colombia.

What are the major concerns that we will bring before the Court?

After four years, the Duque government has not only failed to comply with the security guarantees contained and developed in the Final Peace Agreement, but has also implemented alternative measures to address the situation of social leaders. These measures have proven to be ineffective, as indicated by the numbers of violations of the rights to life and personal integrity, reports of threats, displacements and other violations such as theft of information.

According to the Ombudsman’s Office, at least 145 social leaders were killed in Colombia in 2021. However, organizations that monitor this problem point out that there may be a significant underreporting.

Why, after four years, has the government preferred to create new security measures instead of implementing those contemplated in the Peace Agreement?

In 2018, the Government stated that it would carry out the Timely Action Plan (PAO) to respond to the violence affecting social leaders.In this process, it ignored the doubts about the plan that civil society organizations and social leaders had, who had no participation in either the configuration or implementation.

2. We insist on a failure with structural scope after the non-compliances

The Executive has taken punctual measures on some security potholes instead of addressing the situation in a structural way. It is important that structural decisions are taken in the framework of an unconstitutional state of affairs (ECI).

In the first decisions, the constitutional judges found that the rights of the plaintiffs were violated and issued the following orders: the recognition and obligation to guarantee the right to defend rights; the reactivation of the National Roundtable of Guarantees and the Territorial Roundtables of Guarantees; the elaboration of a campaign by the Presidency to address the stigmatization of social leaders; and the inclusion of an ethnic, racial and cultural approach in the security measures of the National Protection Unit (UNP).

However, the State institutions have not yet complied with the order and the situation continues to be worrisome.

What do we hope to achieve with the hearing?

Context: The long road of the charge action

In 2019, a group of social leaders from Cauca, Chocó, Casanare, Antioquia, Valle del Cauca, Putumayo, Córdoba and Medellín filed a charge before the Superior Court of Bogotá seeking to demand that the Colombian State protect their right to defend human rights.

There, the constitutional judge was asked, among other things, to declare the state of unconstitutionality with respect to the serious security situation faced by those who defend human rights in the country and, consequently, to protect the rights of the plaintiffs. In addition, it requested the adoption of structural measures to overcome the crisis and a pronouncement on the obligation of the authorities to comply with the measures contained in the Final Peace Agreement.

In December 2020, 189 social leaders signed a letter addressed to the Constitutional Court requesting it to review the file of this charge.

On January 29, 2021, the Constitutional Court selected the tutela file for review and is now convening a public hearing to learn about the current situation of social leaders and to determine the scope of public policy regarding the protection of leaders and human rights defenders.