More than 7,000 organizations and individuals urge the Colombian Constitutional Court to eliminate the censorship of human rights defenders from becoming Judges and Magistrates of the Special Jurisdiction for Peace

Citizens urge the Constitutional Court to eliminate the prohibition of human rights defenders from becoming judges and magistrates of the Special Jurisdiction for Peace (SJP) established in Articles 100 and 104 of the draft statutory law of the SJP.

In the context of citizen interventions before the Constitutional Court at the revision stage of the laws and decrees to implement the Final Peace Agreement, this Tuesday, June 5, 2018, civic, victims’, and human rights organizations, with the support of more than 7,000 people who signed a citizen petition online, demand that the Constitutional Court declare unconstitutional the provisions of Articles 100 and 104 of the “Draft Statutory Law 008 of 2017 – Senate and 016 of 2017 – House of Representatives,” “Statutory on the Administration of Justice in the SJP,” which establish as ineligibilities to serve as a judge or magistrate of the SJP having engaged in activities inherent to the defense of human rights—such as legal representation of victims on claims against the State for grave violations of International Human Rights Law (IHRL) or International Humanitarian Law (IHL), before national tribunals or international bodies. 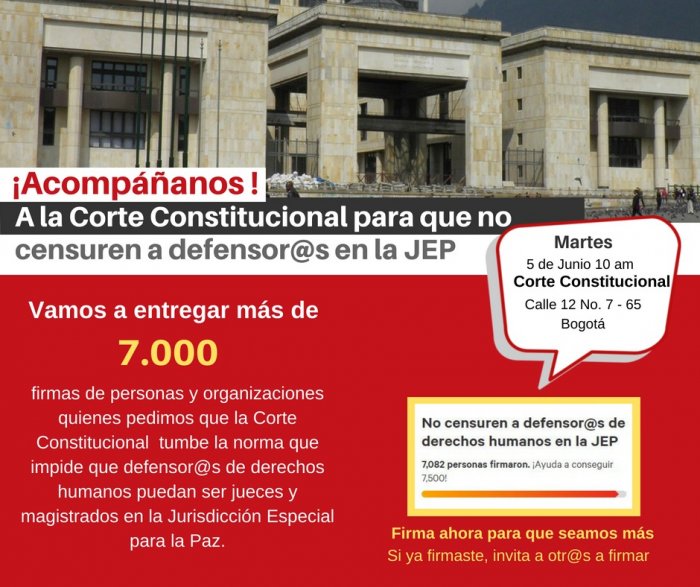 These measures that were included in the legislative process after the SJP Selection Committee had publicly appointed the judges and magistrates of the SJP this past September 26, 2017, violate international standards for the protection of human rights defenders, as well as national norms on the matter. Even further, these types of norms contribute to deepening the stigmatization against the defense of human rights. This, in the Colombian context, has led to the systematic and generalized assassination of up to 522 human rights defenders from January 2010 to June 2017, according to reports from the “We Are Defenders” Program (“Programa ‘Somos Defensores’”). All of which merits a response from the Constitutional Court in defense of the rights of this population that, against a backdrop of profound risks to their lives, has worked tirelessly to consolidate the values and principles of the Rule of Law (“Estado Social de Derecho”), and could make ideal contributions to realizing the goals of the Special Jurisdiction for Peace.