They Knew: Did they give the order? The report submitted to the JEP analyzes the responsibility of high civilian and military commanders in extrajudicial executions since 2004 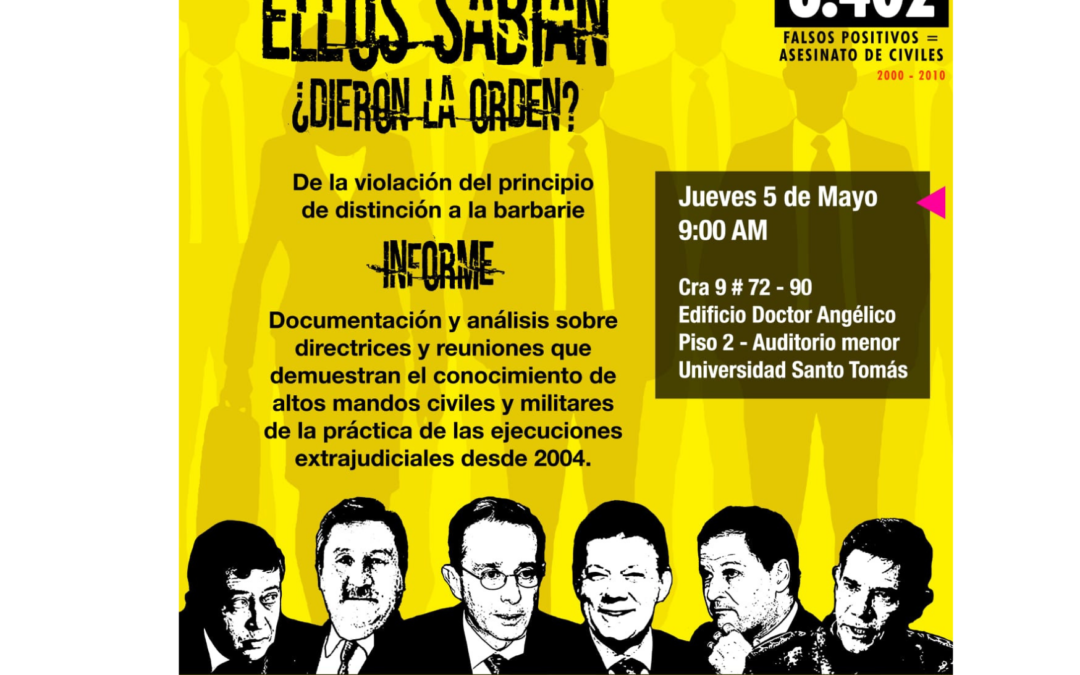 The report presented by ten member organizations of the Strategic Litigation Area (Espacio de Litigio Estratégico) focuses on the period 2006 – 2008.

*This report is intended to contribute to the truth and the fight against impunity in this case of serious human rights violations.

This Thursday, May 5, 2022, at 9:00 a.m., the hearing will be held before the Special Jurisdiction for Peace -JEP- of the report “They Knew Did They Give the Order?: From the violation of the principle of distinction to barbarism”, a document that accounts for the alleged responsibility of high commanders of the Armed Forces and the National Army, as well as public officials in the practice of extrajudicial executions throughout the national territory, analyzing the period of time between 2006 and 2008.

The event will be held in the smaller auditorium of the Doctor Angelico building of the Universidad Santo Tomás in Bogotá (career 9 # 72 – 90), with the participation of relatives of victims of extrajudicial executions from different departments of the country, who seek to leave a message of demand to the JEP on its responsibility to identify, investigate and prosecute those most responsible for the murders and enforced disappearances falsely presented as casualties in combat, and to know the individual responsibilities in these crimes against humanity.

For Pilar Castillo, lawyer for Asociación Minga, “from the Strategic Litigation Space we have observed that there is a difficulty with the methodology that the JEP decided to apply in case 03, which consisted of investigating from the bottom up. We consider that so far, both in the call for voluntary testimonies and in the orders of determination of facts and conducts, the JEP continues to focus on the military who had already been linked in the ordinary justice system, even some who already had criminal convictions against them, which does not contribute to what we believed from the beginning would be the added value of the jurisdiction to go after those military participants who, due to the jurisdiction to be investigated, had not been called by the ordinary jurisdiction”.

The report also shows that there was a criminal plan prior to the period under study and demonstrates that by that time (2006-2008) it extended to all divisions of the National Army, often accompanied by hate speech, through orders and involving the civilian population, public officials and a significant number of major, minor and tactical units, in a plan that was executed in a staggered manner, involving the entire hierarchy and passing off serious human rights violations as legitimate actions. This shows that the claim of “rotten apples” is nothing more than a distraction to avoid recognizing that there was a Systematic Criminal State Policy that first authorized the commission of the practice, its ‘routinization’ and, subsequently, its cover-up.

“With this report we present the JEP with material evidence that will allow it to see that in effect the high commanders of the National Army and the Military Forces, as well as high-level officials such as the president and vice president of the Republic, had early knowledge of what was happening and did nothing to prevent it,” said attorney Pilar Castillo.

The military high command and civilians with high positions within the institutionality knew about the increase of extrajudicial executions since its early stages, there are documents that prove that there were formal complaints for these crimes at least since 2004, as well as at least 42 meetings, trades and working committees in which officials of the Vice-Presidency of the Republic, the Presidential Program for Human Rights, the Ombudsman’s Office, the Human Rights Directorate of the Attorney General’s Office, the Ministry of Defense, the Ministry of the Interior, the Directorate of Military Criminal Justice, the General Inspectorate of the Military Forces, the General Inspectorate of the Army, the Army Command, the division commanders and the Office in Colombia of the United Nations High Commissioner for Human Rights participated or were aware of.

The report demands that the Chamber for the Acknowledgment of Truth, Responsibility and Determination of Facts and Conduct of the SJP call the following persons to testify voluntarily or be summoned as witnesses for the responsibilities they had in different institutions during the period under analysis:

It is expected that the Special Jurisdiction for Peace will take into account that the prosecution and criminal punishment of those responsible for crimes of extrajudicial executions constitutes an international obligation of the State, which binds its judicial organs. Failure to comply with this obligation translates into impunity on the part of those who fail to comply with it.