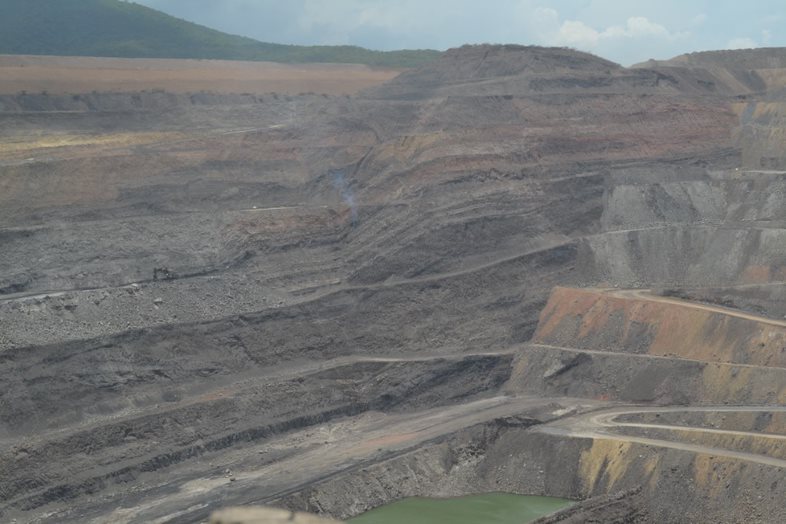 The OECD has accepted a complaint against Irish state-owned ESB for alleged failure to conduct responsible business conduct in the purchase of Colombian coal.

The National Contact Point (NCP) of the Organisation for Economic Co-operation and Development (OECD) in Ireland has agreed to assess a complaint against the Irish state-owned energy company The Electricity Supply Board (ESB) – the purchaser of coal from Carbones del Cerrejón, operator of the largest open-pit coal mine in Latin America.

The complaint was filed in January 2021 by a coalition of national and international organisations – composed of CAJAR, CINEP, AIDA, GLAN, ABColombia, Ask and Christian Aid – with the support of several leaders of indigenous Wayuu and Afro-Campesino communities that have been historically affected by this extractive coal mining megaproject.

For years, ESB – Ireland’s largest energy company – has purchased millions of tonnes coal from the Cerrejón mine in La Guajira, Colombia for use in its Moneypoint power station in County Clare. The complaint alleges the company’s failure, as a purchaser, to comply with OECD standards of due diligence and responsible business conduct on environmental and human rights issues.

In addition, the complaint alleges that the ESB has failed to take the necessary actions to influence Carbones de Cerrejón’s due diligence in identifying, mitigating and preventing human rights abuses linked to the mine, despite well-documented evidence of serious violations against indigenous Wayuu and Afro-Colombian communities, including environmental impacts and threats to human rights defenders.

Following an initial assessment stage of the complaint, the OECD’s NCP in Ireland released an statement on Monday 18 July 2022 confirming that it found sufficient grounds for further investigation of the issues raised. According to the complainant organisations, ESB’s purchase of Colombian coal has been made despite the company’s knowledge that the coal comes from a mine with multiple evidence of serious human rights violations. The company itself, on its official website, stated:

“ESB is well aware of Colombia’s difficult history which has had serious impacts on its population for many years. We are also aware of the issues reported in the media in relation to the Cerrejón mine, many of which are related to Colombia’s history. We are committed to remaining vigilant on all of these issues and will continue to work with Bettercoal to influence and drive improvements. We bring these issues to Bettercoal for assessment as a matter of course .”

Although ESB had previously indicated that it stopped buying coal from Cerrejón in 2018, it recently announced that in the wake of the Russia-Ukraine war it was resuming purchases of this coal for the coming months. On his recent visit to La Guajira in April this year, Irish MP Gary Gannon criticised ESB for restarting coal imports from Cerrejón:

“Gary Gannon, who travelled to Colombia in April as part of the parliamentary delegation, said he had seen with his own eyes the devastating environmental impact of the mine and the pain of indigenous communities displaced from their land for its expansion. “There is a worrying double standard in this return to Cerrejón,” he said. “We rightly said no to Russian coal after the invasion of Ukraine, recognising the impact our business decisions can have on human rights. But that standard must apply everywhere, including in Colombia “.

In the words of Wayuu leader Jakeline Romero Epiayu:

“European countries, with total hypocrisy, send us messages of decarbonisation, of abandoning the use of fossil materials, but suddenly they put Colombia and La Guajira back in their focus to buy this coal that they continue to need, this coal that we have tirelessly said is stained with blood, stained with the lives of Wayuu men, women, and children .”

The complaint requested, among other recommendations, that ESB end its business relationship with the purchase of Colombian coal; issue a public statement acknowledging the need for this cessation; call on the mine’s parent companies to initiate progressive closure of the mine and remediate its impacts; compile and publish an effective human rights policy; and issue a formal apology to the affected communities.

Following the issuance of this initial assessment, the Irish NCP will formally ask the parties whether they are willing to engage in mediation with the objective of reaching a resolution to the issues raised in the complaint. The offer of good offices is voluntary for both parties. If a mediated solution is not possible, the Irish NCP will conduct a review of the complaint and reflect the outcome in a Final Statement which may include recommendations to better implement the OECD Guidelines.

The Irish NCP also noted that it is still processing another complaint against the Dublin-based CMC Coal Marketing Company, which is responsible for the marketing and sale of coal from the Cerrejón mine.

In the current context of increasing demand from buyers of Cerrejón coal in the wake of the Russia-Ukraine war, this complaint sends an important message of questioning the human rights obligations and corporate due diligence duties of countries and companies that buy and consume this coal.

Cerrejón and ESB a business alliance that has ignored human rights

In 2020, the UN Committee on the Elimination of Racial Discrimination expressed its concerns about the Cerrejón mine’s Dublin-based sales headquarters, the Coal Marketing Company (CMC), and its supply of coal to the state-owned ESB, recognising that these issues “have been linked to serious human rights violations affecting especially Afro-descendants and indigenous peoples”. In doing so, it recommended that the Irish state consider ceasing to purchase coal from the Cerrejón mine. Recalling the Guiding Principles on Business and Human Rights, the Committee recommended the Irish State to:

(a) Consider ceasing to purchase coal from the Cerrejón mining complex;

(b) Support the launch of an independent investigation into the mine’s activities and provide redress and compensation to victims of displacement and other human rights violations;

(c) Ensure that victims have access to effective remedies and compensation in Ireland;

(d) Adopt a regulatory framework under which all companies domiciled in or under the jurisdiction of the State party identify, prevent and address human rights abuses in the context of their operations in Ireland or abroad, and can be held accountable for such abuses;

(e) Ensure that the national action plan on business and human rights is effectively implemented by all stakeholders.

In September 2020, several UN special rapporteurs called for the suspension of some of this mine’s operations as it “is seriously harming the environment and the health of the country’s largest indigenous people” .
Despite the fact that the constant, serious links between human rights violations and the mine’s operations have been recognised in the highest national judicial instances, such as the Colombian Constitutional Court, accountability of the multinational companies at the top of this global supply chain remains unaddressed.

In a context of a climate crisis in which tensions are emerging between the urgent need to progressively abandon of fossil fuels on the one hand and plans to deepen extractivism on the other, it is essential that we ensure serious public discussion regarding the complex framework and architecture of impunity, asymmetries and abysmal gaps faced by the victims of multinational companies in the coal chain. As the world rapidly transitions away from harmful fossil fuels, impacted communities cannot be left picking up the pieces.

Similarly, given the extrajudicial and voluntary nature of this mechanism and the inadequacy of the current voluntary guidelines for multinational companies, it is binding national laws are passed to mandate adequate due diligence and hold companies liable and accountable for contributions to human rights harm. It is important to continue pushing for a binding, UN-level treaty on business and human rights that can deliver real fulfilment of justice over unchecked transnational corporate power.

The ESB, like so many other coal buyers, has thus far argued that membership of the voluntary ‘Bettercoal’ initiative alone is sufficient to ensure that coal is purchased in an “ethical and responsible manner” on the international market. In the complaint this is a key issue, and it is absolutely clear that this voluntary, ineffective, industry-funded initiative does not satisfy due diligence requirements.

Bettercoal was established in 2012 by a group of major global coal buyers under the assumption of promoting a globally responsible coal supply chain. However, this initiative has no mechanism for accountability, sanctions or effective participation of affected communities, is not transparent and is insufficient to address and stop the abuses and human rights violations that continue to be committed by coal mine extraction.

In 2018, Bettercoal assessed Cerrejón but the outcome of these assessments and the follow-up to them has not been made public. Bettercoal does not disclose its methods or investigations, only its findings in summary form. No details were provided on how Cerrejón “complied” with the Bettercoal code. The Bettercoal assessment initiative “is an industry-funded process, unfit for purpose and lacking in transparency “.

Why will the OECD investigate this complaint?

Although the OECD Guidelines set out “voluntary” principles and standards for multinationals, countries that adhere to the Guidelines also make a “binding commitment” to implement them. In other words, states are required to ensure compliance with the Guidelines. This includes the Ireland, particularly given the company involved is 95% owned by the Irish state.

The OECD Guidelines make very clear that responsibilities for companies’ business activities and relationships are not limited to withing specific national borders. In other words, companies have a responsibility to identify and address negative impacts throughout the value chain “from and wherever they occur”.

The Guidelines note that where companies have not contributed to these impacts or human rights violations, they still have a duty to demonstrate their efforts to prevent or mitigate negative impacts as “directly related to their activities, products or services by virtue of a business relationship”.

The Guidelines recognise that, while there are practical limits to the ability of companies to impact behavioural change in their business suppliers, there are guidelines and duties of conduct that companies should undertake with their suppliers as appropriate responses when risks of human rights violations are identified in their supply chain to enhance and help embed principles of responsible business conduct.

The aim is to promote rules of conduct that prevent companies from procuring a product associated with any kind of human rights violation or adverse environmental impact, regardless of the severity or context in which it occurs, and that do not warrant any kind of investigation or questioning of their responsibility.